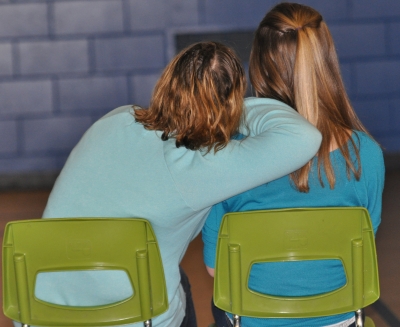 Last spring, several teachers at Marymount Academy received word that they were successful in their grant application to the Ministry of Education. Their application focused on the problem of adolescent girls, and the growing levels of anxiety and depression in today’s society. Recognizing that this is a universal problem, these teachers felt that being in an all-girl school environment, it was a great opportunity to bring forward some solutions in their own school community. Teachers Lisa Levecque, Kim Fahner, Tammy Jutila, Anna White and Chaplain Jen Geddes began looking for ways in which they could change the focus for students – looking to the positive in themselves, and in others. One of the main ideas they landed on, is a campaign called “Finding Kind” (www.kindcampaign.com) which is a campaign driven by two American students – Lauren Parsekian and Molly Thompson, who created a documentary as well as a non-profit organization. According to their website, their mission statement is that “the Kind Campaign is an internationally recognized movement and school program based upon the powerful belief in KINDness that brings awareness and healing to the negative and lasting effects of girl-againstt-girl “crime”.
All the students gathered in the gym on Wednesday, March 27 to screen the documentary – “Finding Kind”. Teacher Tammy Jutila introduced the film to the students with a very important message. “It is a simple message really,” Jutila said. “You are not alone. Every single girl has encountered an experience at some point in their lives in which they become aggressors or victims of jealousy, rumours, name-calling etc. Finding Kind is about recognizing this in all of us, and encouraging change – it starts with you!”
As a follow up to the film, the students and staff took a pledge of their own promising to be kind to others creating a more positive environment.
The students were also informed that, later in the spring, the school will be creating a Finding Kind Club, open to all students so that anyone needing some support/advice etc. can talk to peer mentors and staff to help them with issues, as well as celebrate acts of kindness.
According to teacher Lisa Levecque, another facet to this initiative is an exciting project that links back to the campaign – which will be a school film festival gala that will take place during Catholic Education Week (May 5-10). Students will be encouraged to create their own videos that showcase documentaries, stories and reflections on kindness. “We thought this was a great tie-in project for the students,” Levecque said. “Right now as we approach the end of the Lenten season, we thought what a great opportunity to focus on our Catholic values, and the simple idea of being kind. With the use of technology, students will be creating very powerful and compelling movies that will positively impact each other, as well as create a healtheir school environment.”