Regals Ready to Wrap the Town in Red 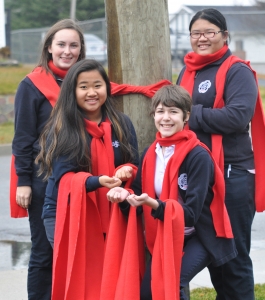 Students at Marymount Academy have been working extremely hard these past few weeks trying to prepare as many red scarves as possible. Several weeks ago, Réseau ACCESS Network contacted local secondary schools to see if they would assist in their “Bundle Up in Red” campaign. According to their press release, the “Bundle Up in Red” campaign “is an awareness promotion utilizing red scarves to capture the attention of Sudburians. Red scarves will be distributed throughout the city. They will be tied around lampposts throughout major city streets and will be attached to trees in both Memorial and Bell Park. Individuals are encouraged to take and wear the scarves which will be tagged with facts about HIV/AIDS.” This campaign is to support HIV Awareness Week which begins November 23rd. Several Marymount Academy students took up this challenge and have been working diligently to get as many scarves as possible in preparation for distribution and already have over 350 scarves ready to go. It is the hope that this campaign will get people thinking and talking about HIV and is a unique way to get this very important messaging out into the community. Scarves can be kept or passed along and any leftover scarves will be donated to shelters. According to Brenda Thompson, teacher at Marymount, her students were onboard right from the first request. “We immediately had students approach us and say they wanted to be a part of this campaign,” Thompson explained. “That is the culture at Marymount Academy. Our students all the way from grade 7-12 are strongly encouraged to get involved in our community, and know that is it very important to give back. The students recognized that this “Bundle Up in Red” campaign was something very relevant for today’s s