MMA Regals Inspired to be Change Agents At Ottawa WEDay 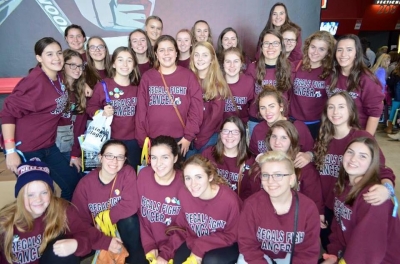 On November 9th, 2015, 35 Marymount Academy students travelled to Ottawa excited for the big event the next day. On November 10, these students had the opportunity to attend the Ottawa WeDay event at the Canadian Tire Centre joining more than 15,000 students and teachers from over 500 schools. Tickets are not available for purchase for this event. Instead, they have to be earned through social justice actions the year before. This is done so that the students can celebrate what they have already done, and be motivated to do more the next year. Students must take part in a local and global challenge, so Marymount Academy students organized a food drive locally, and sold rafiki bracelets made by, and to support women in villages in Africa.
During WEDay, the students were inspired by several outstanding speakers and bands including Rick Hansen, Spencer West, Henry Winkler, Waneek Horn-Miller, Simple Plan and Shawn Hook. A last minute addition to the line up proved to be the most exciting for the crowd as Prime Minister Justin Trudeau and his wife Sophie took to the stage for his very first large scale public appearance and speech. As the new Minister for Youth, Trudeau spoke to the crowd and told them that they are not to think of themselves as leaders of tomorrow, instead to be leaders today. Marymount Academy teacher Lise Callaghan described the day – “It is so fast paced and the feeling is electric in the space,” explained Callaghan. “The students are bombarded with positivity and are told that they truly can make a difference. They are told they need to become “Change Agents” and to find their spark and take steps forward, no matter how small, to achieve their dreams.” The Regals left the event energized, and have already started discussions to continue the momentum from the day, with plans in place to continue to make a difference at the school, community, and global levels.