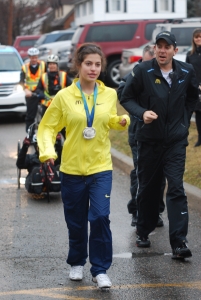 Selected to be one of over 7000 medal bearers from across Canada, grade 8 Marymount Academy student, Carly Zulich was excited and nervous. As both sides of the sidewalk in front of her school was lined with hundreds of her peers, Zulich waited anxiously for her turn to run wearing the Rick Hansen medal, passed on to her from endurance athlete Tyrone Henry. Cheers from the students began as the police escort pulled onto the property with the Rick Hansen Foundation convoy and Henry following closely behind. After some inspirational words from the Foundation representatives, and Henry, Henry passed on the medal to Zulich so she could take her turn running her leg of the run as part of the 9 month long, and over 600 community relay across Canada.
“It is such an honour for our school and our student to take part in such an historic event.” Lori Holden, Vice Principal of the school stated. “ Carly is an exceptional student, and I know that she is so appreciative of this opportunity – just as we are as a school. We feel very fortunate to be a part of something so inspirational, as we have all been inspired by the accomplishments of Rick Hansen and his foundation.”