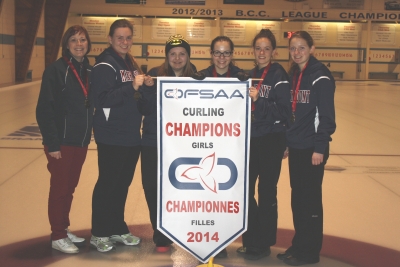 The Marymount Regals curling team came home OFSAA champions this past weekend with an 8-3 win over Brockville in Brampton. The team, consisting of skip Krysta Burns, vice, Monica Graham, second Cynthia Furlotte and lead Kaylyn Collin and Kayla Nickson were elated with their gold medal win and the school’s second curling crown ever, and first since 1981. Team coach/teacher Brenda Thompson was extremely proud of the girls and was thrilled that they played so well and remained undefeated during every round. “I, as well as the rest of the school, are so proud of this team and their commitment to playing to the best of their ability,” Thompson said. “ Many of the students and staff were able to watch the final game line online, and were ecstatic to see the team crowned as the provincial champions, which is an absolutely incredible accomplishment!”