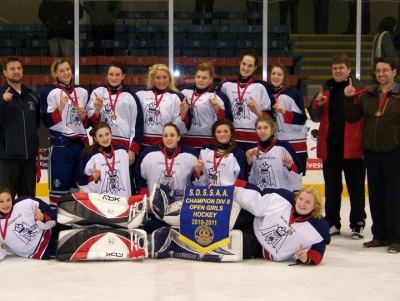 Recently the Marymount Academy Girls Hockey Team won the Division Two championship series in two straight games over Lasalle.  The first game was all Regals as Maddy Pos scored all six goals in a 6 -1 win.  The second game was much closer due to Marymount missing a key player, Lindsey Castonguay.  The final game had a scoreless first period and then Lasalle scored two goals in the second period to lead by two heading into the third.  With 5 minutes left in the game the Regals got on the board when Maddy Pos found the back of the net making it 2 -1.  Then Emily Herbert tied the game up with just over a minute left in the third to send the game into sudden-death overtime and save the day.  Overtime only lasted a few minutes when Maddy Pos became the hero and does what she does best by rushing end-to-end and sc oring the winning goal. Congratulations Regals!!