Learning About Goalball at SCDSB 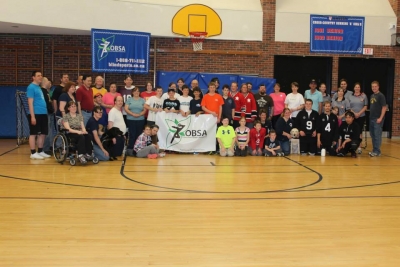 Students from St. James Elementary School recently participated in the Ontario Blind Sports Association Recreational Tournament. The tournament took place in Brantford Ontarion on May 11th, 2013. In addition, Ontario Blind Sports Association, along with the CNIB, provided goalball clinics at St. James Elementary school, Bishop Alexander Carter Secondary School and Marymount Academy on May 23rd and 24th.
On May 25th, a goalball clinic was held for members of the public at Sudbury Secondary Highshool.
A recreational goalball league is planned to begin operation in the fall of 2013.

Goalball is “the” blind sport, created specifically for the blind. It’s an indoor court game played around the world by the blind and visually impaired. The sport was developed in the late 1940’s and is played internationally up to the world championship and Paralympic Games levels.
Teams of three try to score goals using a ball similar in size to a basketball that is about the same weight as a brick and has a bell inside it. Players attempt to roll or throw the ball across a goal line. The opposing team tries to block it using their arms, legs and bodies. With a ball flying at speeds of 65 km/h or more, it’s exciting!

Games last 20 minutes and are divided into two equal halves of ten minutes each, with a 3 minute half time.
The object of the game is to score goals by rolling a ball (called a Goalball) down a 9m x 18m (volleyball size) court toward the opposing team’s goal, which spans the entire 9m width of the court. Players (1 centre and 2 wingers) attempt to prevent the Goalball from crossing the goal line in a totally sightless condition. A Goalball weight is 1.25kg and contains noise bells and along with raised lines on the court, help to orientate the players.
Therefore, while play is in progress, silence is required in the venue to allow the players to concentrate and react instantly to the ball. However, cheering is permitted after a goal is scored and at the end of a game.
Goalball is a benefit to any education curriculum & sports teams
Goalball introduces able bodied students to living with a disability and functioning without vision in a practical, fun setting. It focuses on what the blind and partially sighted can do rather than on what they cannot do. It continues to break down barriers.
It teaches valuable athletic performance skills such as: communication, non visual focus, team work & kinesthetic awareness, explosive lateral movement.
Goalball is one of the most inclusive sports in the world. All participants must wear eyeshades, so removing the sense of sight for all participants creates a level playing field for all.