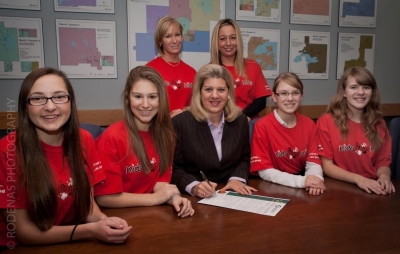 Every year Marymount Academy holds a Christmas food drive to help stock the shelves of the Sudbury Food Bank for the holiday season. Last year the school paired up with “kids helping kids” which was started by Edgar Burton and is the biggest food drive in the city. We raised and incredible amount of cans, over 13 thousand cans. They were told in September that they raised the most cans out of all the schools participating with “kids helping kids”. MMA was then rewarded with “the handing over of the official Vancouver Olympic torch” from last years winner, Lively District School. A group of students went to the mall on Nov 15th, and several tv and newspaper reporters were there including Mel from the radio who talked about how Edgar Burton ran with the torch in Sudbury during the Olympics. He then bought the torch for $500.00 and decided to donate it to the schools who raised the most cans. Marymount Academy now gets to keep the torch for one year
As well, on Monday Nov, 19th, our Marymount Catholic Charities council was asked to visit with the Mayor, her staff, Frank Elsner (the chair of the Sudbury Food Bank), several food bank volunteers, as well as Edgar Burton’s daughter and of course the media for the official signing of the Proclamation. Several MC3 members sat with the Mayor as she explained the process of the signing of an official Proclamation. The girls were thrilled to sit with the Mayor and to be congratulated for their efforts to help the less fortunate in our community. They told her how they just learned about the steps of a Proclamation in their Civics class at school. (they got to see it in action).
The girls were very impressed at being part of history, they were very proud of their efforts and vowed to continue helping our community.