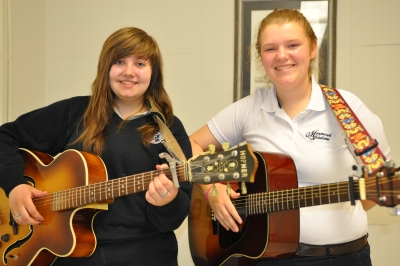 Both Maggie Schell and Kaylyn Collin have been friends since grade 7. Now in grade 9 at Marymount Academy, they have discovered that their friendship means even more as they have both discovered their mutual love of music. Schell, about a year ago, decided to teach herself guitar. After playing around with it for a while, she decided to write a song, adding bits and pieces along the way. Already knowing how to play the violin, French horn and trumpet, Schell’s musical background allowed her to be creative musically and came up with her very first song entitled, “What About Love?” Collin, a bit newer to the guitar, decided to pick it up just a couple months ago when the two started talking about performing at the May 15 Marymount Gala event. Already able to play the cello, and percussion, Collin decided to learn guitar to be able to play Schell’s song with her and make it a duo. The end result was a beautiful friendship that become even stronger as result of their mutual musical endeavours. The pair have been able to perform the song at a number of venues over the last two months and are hoping to write and perform together even more in the future with the possibility of perhaps even putting together a full band.
To hear the girls perform, click play on the video below: